Posted by Karmen | With Comments are off for this post. | In Triathlon World Championships - Chicago

I finished the darn race.

Let’s start there. Because, for that, I am incredibly grateful. 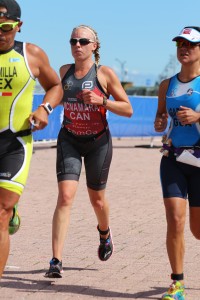 For that – I have to thank Paula Findlay.

I went into the race a bit cocky, determined to show the world that Canada has a strong contingent of female triathletes – elite and otherwise. I am grateful to those who ended up doing a better job of this than I :-). To all of the Canadian athletes who raced – you are the champions.

A bit of background.

Our elite women’s team has had a frustrating three years.

It wasn’t very long ago that Paula Findlay was ranked #1 in the world. Poised to win Olympic gold, she was the darling of the ITU (International Triathlon Union) and of Triathlon Canada.

In fact, I remember watching an interview that she did prior to the Olympics – long before I even really knew what triathlon was. She captured my attention even then with her fierce determination, honesty, and commitment. Strong, beautiful, and talented – she was known for a fierceness that our society seldom admires in women. I remember watching her run down a hill, talking about her approach to the sport, and thinking “that is a mentally strong woman.”

Then, the Olympics came, and she raced with a stress fracture. Despite a horrible swim, and bike she finished the race. She put her head down and she ran. She crossed the finish line dead last.

It was that moment that for me triggered a series of events that would ultimately culminate in me starting to race triathlon. A year later I wrote and presented a talk about that moment, and the inspirational impact that it had on me. 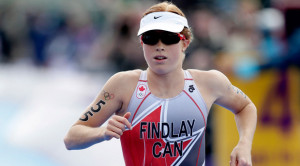 Paula finished. Despite knowing that she was ranked #1, that she would finish in last place – she finished the race. She could have quit at any moment. But she finished.

To me, that showed endurance and strength and will that I wanted for myself.

But that meant that Canada’s hopes for a female podium spot were dashed.

Since then, I have followed the careers of Paula Findlay, Ellen Pennock, Amélie Kretz, Sarah-Anne Brault, and Kirsten Sweetland as closely as any Chicago resident follows the Cubs. While most of the Canadian team was watching the elite race on Friday waiting to see Gwen Jorgensen take home another gold – I watched only for the black and red maples leafs. I took pictures and tweeted their live standings. 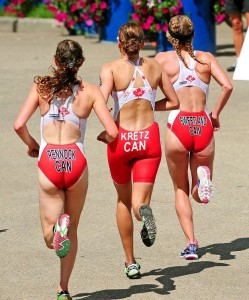 These are my heroes. And the past few years have been tough. Stress fractures, sickness, and bad luck have plagued the team ­­­ever since 2012. Despite living in the same city, I have yet to see Kirsten cross a finish line. (She has – just not at any races that I have attended.)

So, here we are at the ITU World Championships Grand Final.

Paula and Ellen are not fit to race and will not be starting.

Kirsten pulls out after the swim.

Sarah succumbs to illness one lap into the 7-lap bike course.

Amélie finishes the bike in the lead pack, and then slowly dies as her body cramps up more and more on each passing lap. I watch her holding her stomach, eyes focused and determined, but her mind unable to override her body. She drops from 15th to 20th , then to 30th, finally finishing in 47th place.

Putting this into perspective – Kretz still finished in a time that I can only dream about achieving.

But coming off of that and going into Sunday, all I could think about was that Team Canada needed a win. As a nation, we are better than this.

I don’t blame the athletes – I blame the system. We can do better. Our athletes deserve better.

As a country – we have produced gold-medal winning triathletes. And we can do it again. 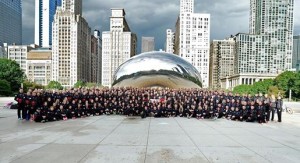 I vow that I am racing today for these women – for my heroes. And especially for Amélie, who finished, despite it all.

It is in that headspace that I start the race.

I had a plan. Line up behind my friend Sandrine who won this race last year, and draft behind her for as long as I can on the swim. Bike the technical course carefully and intelligently. And give the run everything that I had.

Since I arrived in Chicago, my feet had been giving me grief. I spent the better part of the season battling plantar fasciitis, which had flared up again after racing in Edmonton two weeks ago.
I spent the week with my feet taped, staying off of them as much as possible. I knew I wasn’t in my best running form, but I also knew that I had a month post-race to rest.

We jump in the water and swim toward the deep-water start line. The horn blares. Immediately it becomes obvious that I did not factor in the current into my training or my race plan. The water is like a washing machine. Right away I lose the pack, so I put my head down and just swim as fast as I can toward the buoys. 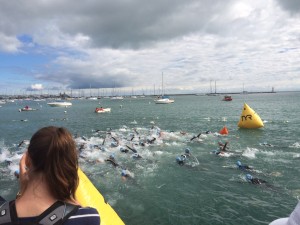 Once we round the turn, I take two seconds to celebrate, but the choppy water is just beginning to rear its ugly head. More than once I find myself off-course, swimming into the men who started behind us.  Frantically I search for toes to follow, but there are none. I start to panic. I can see that I am only 10m from the wall, but with waves bouncing against it and then rolling back toward us that just makes things worse.

I breaststroke just to keep moving. My right shoulder begins to ache from fighting the current.

The lifeguard asks me if I’m okay.

After the longest 31 minutes of my life, the volunteers pull me out of the water at the swim finish.  I run toward transition. 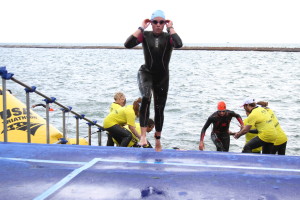 The course is a series of winding underground tunnels beneath Chicago. It is flat, fast, and technical. In some spots it is almost daylight – in others I just pray that there isn’t a pothole that I can’t see. The stench of urine is over-powering. I have never seen so many crashes, flats, and penalties. Pylons mark about a dozen U-turns per lap of the two lap course. Being underground, my Garmin doesn’t work, so I have zero concept of my time. 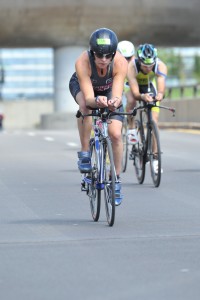 Around kilometer 11, I get my head back in the game and start to pound the pedals. I knew that my run would be mediocre at best, so I decide to leave everything on the bike course – no saving my legs today.

I watch as a group of cyclist ride in a pack past me – taking an illegal advantage. Drafting (riding within 10m of another bicycle, except to pass) is illegal and grounds for a two minute penalty. A second infraction means disqualification. I refuse to draft. It’s one thing to not finish because of a flat tire or a crappy swim. But I will not take a drafting penalty. And I knew that officials were out in full force – last year’s Sprint winner had been disqualified for double drafting on Thursday. The penalty boxes were full.

In all this, I neglect to consume either of the energy gels that are taped to my bike.

On the second lap, I find myself alone for the first time. Odd. ITU races are typically tight, pack, races. You can’t draft but you can play leap frog in groups. I spend a good 6-7 minutes alone, underground – struggling to keep focus.

As I approach the 180 degree turn that marked the final section before heading back to transition, I watch as a Canadian and a Mexican cyclist ride right into each other at 35 km/hour.

Not two minutes later, I see an ITU motorcycle coming toward me.

I hunker down into aero and pedal quickly back to transition, determined to make up as much time as I can before heading out on the run.

By now, the sun is shining and people have packed the street.

The wonderful part of ITU racing is how spectator-friendly the venues are. Our run was 4 laps of the same street – and the entire street was lined with cheering people.

Typically, there were a lot of Canadians and I heard “Go Canada!” every couple of minutes. It keeps me going. I struggle to pick up my pace.

My legs refuse to fire. I look down at my watch and it tells me that I am holding 5 min / km. I should be holding around 4:15-4:20, based on my last few races. But this is as fast as my legs will go. Up and down the street I run. And I remember what Paula said. She put her head down. And she ran. So I do the same.

I breathe in the energy of the crowd.

I cheer back when people scream “Go Canada!”

It’s frustrating because my heart rate is low. My breathing isn’t laboured, but this is as fast as my legs will carry me. My calves simply refuse to fire.

“I’m going to finish this race.”

For Canada. For Amélie. For Paula. For Ellen. For Sarah. For Kirsten.

That’s the only thing that keeps me going.

High five from our team manager. One lap to go.

Watching the other athletes struggling with heat, with muscle cramps….there is a kinship that you develop with these people when you do a triathlon with them. It has something to do with the shared suffering.

The hell with it. 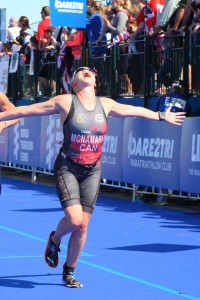 I have a half lap to go, and I know that I can rest for a month. I did deep, deeper than I knew I had, and I pick up the pace to 4:40. I count my steps. I smile at the photographer.

I see the stands filled with people from all over the world, there to support us in our quest for excellence.

And I cross the finish line.

It wasn’t the race I wanted to run. Not even a little bit. But I learned that I can dig deep and finish the race – even knowing early on that I will not do well.

I learned that I can stay in the game.

I learned that I can do a PB (Personal Best) even on the bike even after taking a 10 minute hit on the swim.

And I learned that – like Paula – I too can put my head down and run.

I’m calling that a win.

Watch out in Cozumel.

Thank you for joining me on the journey.