Posted by Karmen | With Comments are off for this post. | In Triathlon World Championships - Chicago

Chicago is lovely. People are as bright and fun and noisy as one would expect in a city known for its music, its racial conflicts, its wind, and its pizza. No 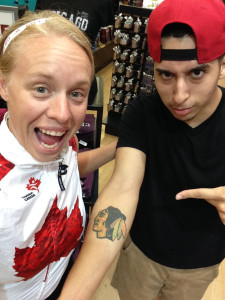 Our hotel is about a kilometer walk from the Lakefront – a series of parks and trails that parallel Lake Michigan.

Despite every intersection being controlled by traffic lights, there are traffic controllers ordering motorists and pedestrians about on every corner.

Locals seem curious about the 6500 athletes that have taken over their downtown streets. I have been stopped more than once by random peop 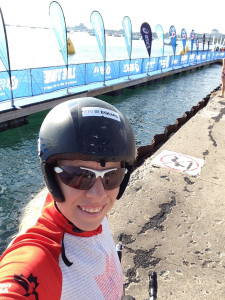 le asking what the heck is going on. They’re mostly supportive though. Felix here runs a souvenir shop and is collecting selfies with people from around the globe.

The course is stunning, well-organized and spectator-friendly. If anyone is curious, a map is available HERE .

This morning I got to watch the sprint race and I am super proud of the Team Canada athletes on a fabulous race! It was HOT and you were ready. Well done!

The swim course especially seems designed with safety and security in mind. I couldn’t be happier about the fact that we swim parallel t o a wall – never further than 10 meters from shore. Talk about taking away 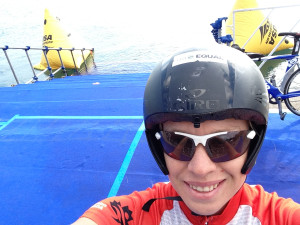 the mental stress! The water is warm (around 17C) clear and clean. It’s a straight, fast, furious, swim that will favour those who can stay in a pack and draft. The swim start (behind me with the flags) is directly across from Buckingham Fountain – right in the centre of town. Monroe Harbor at Queen’s Landing. We will swim 375m north, turn around and swim 1,125m south. We exit at the south end of the Harbor near the Field Museum.

It’s a long run up to transition where there are thousands and thousands of bikes. I tried to get a picture, but it’s not really possible to show just how many bikes there are. My favorite thing about ITU racing is the wonderful and prominent signage everywhere that makes it virtually impossible to get lost.

The bike is a flat, fast and furious course through downtown Chicago. It winds, it turns, and it speeds. 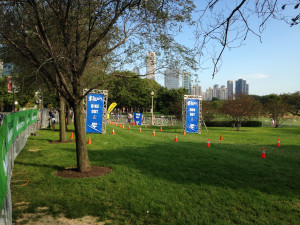 Women this morning were clocking an average of 38 km/hour, despite several U-turns per lap. The course is tightly packed with athletes and it will be a challenge to steer clear of the draft zone. ITU officials are cracking down on drafting rules. The course favour athletes who can adapt quickly to changing light conditions, turn quickly around tight corners, and pass without drafting. It’s a different kind of technical racing that requires athletes to keep their head in the game at all times. 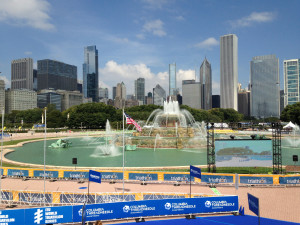 Back to transition for and out on the run course for 3.5 laps of the flat sidewalk. The Buckingham Fountain is stunning and the run offers some great views of the streets of downtown Chicago. The run and bike courses both run down Columbus Drive, and both sides of the wide street are packed with spectators – keeping energy high. The run will favour those who prefer pavement, who prefer flat, and who can hold a sub 4:30 pace (likely 4:00 for men) for 10 km. Runners must be able to run in packs – with 3.5 laps on a 10km run there is no room for error.

Finishing up in the park, the grandstands are set for cheering family, friends and fans. It is going to be a fast, fast race. The leading men this morning were finishing the sprint in around an hour, and the women around 1:04 for the win. 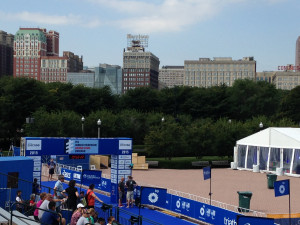 Weather conditions are looking ideal. 20C sunny and no wind. I can’t help but pray for some extra heat. 🙂

A huge thank you to everyone who has supported me in getting this far. You are amazing! An extra shout out to SamCo, Anne Paterson’s Flowers, ITS Fitness, SPUD and Fit Your Life.