VIC THE VAC AND OTHER VAMPIRES

Posted by Karmen | With Comments are off for this post. | In Surgery

Graphic Content Warning
Wow. My last post was clearly written in haste, with the knowledge that I had at the time.

With the benefit of hindsight, I can tell you that reality played out quite differently.

But I’m leaving it posted because it’s not that it’s medically inaccurate or that I was trying to mid-lead you. It’s just that I proceeded with the knowledge that I had at the time. And then something else happened.

Knowledge that became obsolete shortly after I arrived at the hospital.

It’s amazing in life how often we proceed with the best knowledge that we have at the time, only to realize looking back that we were wrong. Or at least – that there was more to the story.

How often have you made an assumption without even realizing it?

Whether it’s small things like ordering the wrong thing at a restaurant because you mis-read the menu.

Or buying the wrong stock because you were sure that the market was due for a comeback.

Or planned your dream vacation only to get there and realize that it’s the rainy season.

Or going on a date with that seemingly awesome human, who a week later turns out to be a narcissistic idiot.

Some of these things are avoidable in advance with a bit of research.

And some things in life, we just have to experience.

Someone told me once that “man plans; God laughs.”

And whatever your religious beliefs, I think it’s fair to say that we’ve all been situations where our plans went completely sideways.

So, I arrived at the hospital Monday afternoon, expecting to be sent for surgery Tuesday morning.

Dr. Quinlan wasn’t happy with how the wound was healing (it really wasn’t healing at all) and so he wanted to get back in there, clean it out, and sew me up again. 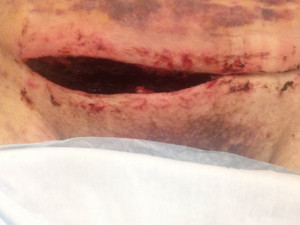 The lovely South African man continues to refer to my wound as a “nuisance” however, not a tragedy. This helps me to stay grounded.

I checked in at 3pm Monday, and was pretty calm. I was back in the same room. I knew most of the nurses. I had a pretty good idea of what to expect.

I was told that I would be assessed by a wound specialist and that a plan would be developed.

I’m developing a tremendous amount of sympathy for (good) journalists; sometimes you have to go with what you know at the time, and it turns out to be totally false. Even with the best intentions.

I’m learning to go with it.

Ly is an RN who has been specializing in wound care for the past 15 years.

She explained that her goal was to keep me out of surgery.

She examined my wound, removed the last of the staples, and let me see the gap.

She could put her entire hand inside.

She got out a suction machine (kinda like the one the dentist uses) and literally was able to stick it 3cm inside my abdomen to suck out the old blood. 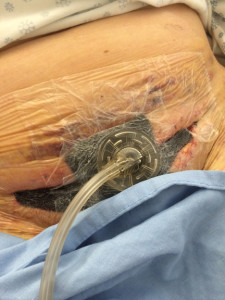 I have a pretty strong stomach, but watching that was the first time I felt woozy.

She packed it full of gauze and told me that she felt I would be a good candidate for a KPI VAC Ulta. It’s a negative pressure machine that does two things.

Firstly, it sucks out all the old blood, dead cells, all the crap that is getting in the way of healthy tissues.

Then, once everything is cleaned out, the vacuum stimulates the healthy tissues to replicate faster – therefore expediting the rate of healing. The studies show that healthy non-smokers with a VAC can heal up to twice as fast as those who heal conventionally.

The VAC is a combination of foam that packs the wound, a suction tube that moves the tissue out, and computer that creates the negative pressure.

The VAC helps the wound to seal from the inside out, as opposed to from the outside in.

The downside is that the VAC takes time; best guess is that I will need one for 8 weeks.

So, Tuesday morning instead of surgery, Ly and Dr. Quinlan hooked me up to “Vic the Vac” who has been following me around ever since.

Vic’s a pain in the ass.

He beats surgery, as I can walk around, use the bathroom independently, buy coffee, eat whatever I want….but it sucks because I have to lug a big, heavy IV pole everywhere.

I can’t really carry anything, so I’ve rigged up a small backpack on the pole to hold my phone, a bit of cash, etc.

Yesterday was basically spent getting used to the sensation of having my insides sucked out, pacing around the ward, and fielding questions from well-wishers who were more confused than I was about what was actually happening.

I think the pain meds are also messing with my brain. I can read, work, type, but it takes me about twice as long as usual to get anything done.

And the nerve endings in my abdomen are starting to re-grow, so the pain is actually getting worse, not better.

Today, Dr. Quinlan and Ly both came by to check on me. At this point, there are two completely contradictory options.

Option A: They send me home tomorrow with a smaller version of Vic the Vac, and he heals me over the next 8 weeks. Home Care nurses would come 3 times a week to change the foam and monitor my progress.

Option B: Back in surgery on Friday, get stitched up, and sent home 24-48 hours later, without Vic.

I’ve been told that at the end of the day the choice is mine, but I admit to feeling conflicted.

Ly is strongly in favour of the VAC.

Dr. Quinlin is leaning toward the surgery.

I want to see what the wound looks like tomorrow.

I want to see what Victor has accomplished in 48 hours.

If he’s doing a good job – great. If not – let’s try something else.

Ultimately, my goal is to get strong and healthy as soon as possible.

I am scheduled to race Great White North Sunday July 3. It’s the qualifier for the 2017 LD World Championships in Penticton. To qualify, I need to place in the top 5.

That’s my goal. I will do whatever it takes to get me there.

I have a race to win.