Posted by Karmen | With Comments are off for this post. | In Race Reports

Yesterday’s race was a win on many levels, but also an opportunity to highlight areas that need work.

In short-course racing, there is very little room for error: all your weaknesses lay exposed. In many ways it’s harder than long-course, because every second counts.

Building up to the race, there were a few things that made me question racing at all: I caught a head cold, then a stomach bug, then my bike was wrecked in a car accident.

I was able to borrow a bike, but literally spent the 48 hours prior to the race setting it up to fit me as best I could.

Going to the race, I was feeling a combination of excitement to be there: Kelowna is one of my favorite race venues, and dread at the thought of not succeeding: I’m learning that this is normal for me. I kept telling myself and anyone who asked that my goal was just to have fun: this was partly true, and also partly hoping that the more I said it, the more I would believe it.

The swim was a deep-water start, which was great because it alleviates that shock the body often feels when it hits the cold water. My teammate, Lauren Babineau, and I lined up next to one another. We swim close to the same speed, and I think we both knew that if we could work together, we’d both have a faster swim.

The horn went off, and I was able to g 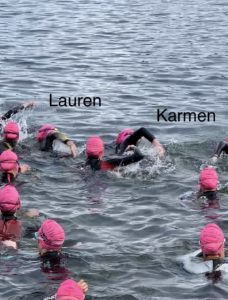 et on Lauren’s feet right away. Unfortunately, the middle-of-the-pack men were rounding the first buoy for their second lap around the time that we reached it. I do wish that the race organizers had given the men an extra five to ten minute head start before the women’s race began. But, we worked with what we had.

I started panic attacking around the 200m mark when the women overtook the slowest men, but was able to get over it by focusing on just staying on Lauren’s feet and taking it one buoy at a time. Around the 800m mark, Lauren’s goggles came off, and she stopped to fix them. I swam ahead, and she was able to jump back on my feet. We stayed together and exited the swim five seconds apart: I was in second, and she was in third. We found out after the fact that we had the ninth and tenth fastest swims of the day, respectively: men or women.

I got an amazing spot in transition: at the end of a row, and the closest spot to the Swim Entrance. T1 was sloppy.  I really need to invest some time in just practising these. I haven’t been and it showed.

Hammered the first five kilometers of the bike and probably went too hard out of the gate, managing to stay in second, knowing full well that Lauren is the stronger cyclist. Lauren passed me at the bottom of Summit and never looked back. I need to work on climbing – it’s coming, but I’ve got a lot of work to do. Since IM 70.3 Victoria, I’ve put a lot of work into descending: it went much better. Still need more practice, but I was much more confident than I was in Vic, a sign that the work is progressing. That being said, there’s still a massive gap between my average power output and my weighted power: a sign that I need to work on consistency.

My power and heart rate were also considerably faster on the first lap than the second, indicative of going out too fast.  Bike needs a fit (obviously) as my knees kept hitting the elbow pads. But, all things considered, not awful. I was able to hold my spot behind Lauren, and was third off the bike.

T2 was even sloppier than T1. I had forgotten to take my calcium tabs out of my shoe so I wasted 10 secs taking it off and putting it on again. Transitions don’t usually make or break a long-course race, but they are critical in short-course racing, and a relatively easy way to knock off 30 seconds. Again, these just need practice.

The run. Usually running off the bike feels dead awful, but I actually didn’t feel too bad. I was able to settle into a solid pace (4:30/km) right off the bat. This is slower than I’d like to see, but realistically a good reflection of my current fitness. Lucy Smith from Triathlon Canada was out on the course giving incredible cheers and feedback along the way “run strong, relax, that’s it!” Going into the second lap, I knew that I was about 90 seconds behind Lauren, who is also the stronger runner, and I knew that if I wanted to avoid blowing up, the smart thing to do was just hold my pace: at this point, I wasn’t going to catch her. I had also made a note at the 2.5k turnaround that the fourth place woman was at least a minute behind me, so I felt secure in my spot and just focused on running steady.

When she passed me around 6.5k, at first I thought she was a Sprint athlete and didn’t pay her much attention. But then I noted her number, and realized that she was in the Standard distance.

I mustered the energy to run past her, betting that she had burned a match to pass me, and hoping that if I could overtake her with 3k to go, that

she would fall back. This was the first time I’d seen her that day though, and I she must have made up a considerable amount of time on the run to make up for the gap off the bike.

Within two minutes, she leap-frogged past me, and took off. I was holding 4:15-4:20 at that point, and held on for about a kilometer, but the gap between us grew wider and wider, and I knew she was out-running me by a considerable margin.

She ended up crossing the line 90 secs ahead of me, which means she held sub 3:45s for the last 3k – an unbelieavable run. It was frustrating to be passed so late in the race, but she crushed that run and earned the 3rd place spot, no question.

Overall, I won my age group, was the second amateur to cross the line (Mary and Lauren are Pro’s) and was the fourth woman overall. More than anything, I was so grateful to be racing.

I took 32 minutes off my 2014 Kelowna Apple race time, and beat my Standard distance PB by 24 minutes. Not bad.

Overall, I think this race was a good reflection of my current strengths and weaknesses. With IM 70.3 Canada 3 weeks out, this was a good confidence boost.

When Les Pereira of Triathlon Canada put a gold medal around my neck, he said “Canadian Champion. That’s got to feel good.”

And it does. A year ago, I couldn’t train properly, and was struggling to just keep my head above water. For me, this is about finally getting healthy.

And the day was made even more special in that I got to share it with my teammates who crushed it out there: Lauren Babineau placed second, and first in her age group; Robert Johnson won the men’s race outright, and Bill Spittle placed top-ten with a massive PB.

This would not have been possible without the work and de 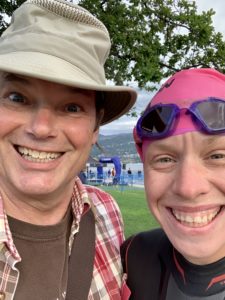 dication of some amazing people: My coach, Clint Lien, who reminds me not to take myself so seriously, but also to work my ass off; Christie Bodden who graciously lent me a beautiful bike to race on, the whole crew at North Park Bike Shop in Victoria, who take amazing care of my bikes; ChainLine Cycle in Kelowna for coming through with last minute parts, F2C Nutrition  for keeping me fueled, both on and off the course, my teammates at Mercury Rising Triathlon, who create a positive and competitive environment where we all become better athletes, and, of course, my partner Jim Rabb – who is supportive and loving, day in and day out. I could not do it without you.