Posted by Karmen | With Comments are off for this post. | In Inspirational, Workout

Wow. What a race. I am startled and happy to look back and say “I did that.” 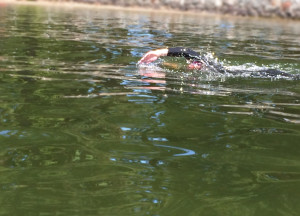 This was an interesting race in that it was basically a trial run for the LD World Championships. I had goals in each discipline, but no overall race goal. I didn’t even know if I intended to finish, truthfully, not knowing how my foot would hold up. The goals were to have a calm swim and a strong bike. I also wanted to test out my nutrition and see how it would hold up in a long race. With LD World Championships only 2 weeks away, the goal was for this race to help build the confidence I will need to race on the World Stage.

Overall, I am absolutely thrilled. My overall time is nothing to write home about (5:59) but I feel that I achieved my goals and then some. It was also a boost to learn that I pl aced 40th out of 112 athletes – knowing that this was a build race.

I have talked before about the challenges I face in the swim. It’s a constant struggle for me because physically it is my strongest discipline. When I can get my head in the game. My goal for this race was to swim calmly and confidently, practicing my mantras that I will need in the 4k race in Sweden. I struggle with anxiety, with keeping my heart rate down, and with believing that I can in fact finish the race without dying.

5 minutes before the race started, I saw a lady from my team that I don’t know well. She is someone that I admire, and it was great to see a friendly face as my teeth were chattering and my knees were shaking. She wasn’t racing, but she was there to support those of us who were. I walked over to her, tears barely held back and said simply “I need a hug.” She gladly embraced me, and gave me the boost I needed to start the race. Tenille, thank you. I don’t think you knew how much that meant.

The gun went off and I started to swim. I knew that if I could make it to the first red buoy in the centre of the lake that I was good to go. I struggled to resist turning back several times. Each time I would look over and see the kayaks lining the course, and know that I could keep going. So I kept swimming. I swam slowly, methodically. But I kept swimming.  Around the halfway point, and had an AH-HA moment where I realized that I was going to finish this swim. That brought me more joy than I can describe. It wasn’t easy. But I did it.

The Bike.
It took me about a kilometer to s 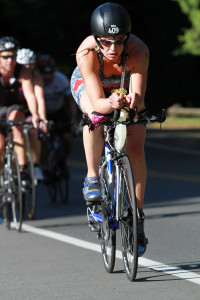 ettle in on the bike. I had some trouble with getting my shoes on (need to rehearse my transitions!) and finding a rhythm. Traditionally, the bike has been the weakest part of my race and I have spent the past 9 months focusing on gaining bike strength. I was anxious to see what I could do. I think it helped that I had no plans to run the run. The goal for today was to finish the swim and the bike, so I could really hammer this leg – whereas usually I hold back and end up coming up short. The bike was a constant battle of leap frog from start to finish. it felt like no one was even thinking about the drafting rules, and just kinda doing whatever they wanted. The rolling hills were tough, but I was comfortable on the terrain, having been training here since October. Overall, I took 55 minutes off my previous Half Iron bike time and place 30/112 on the bike. Absolutely thrilled. I averaged 29 km/h for 3 hours – something I never could have dreamed of doing a year ago. This ended up being, by far, the strongest part of the race for me. 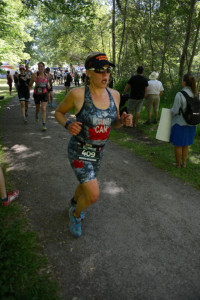 I had zero expectations about the run. My coach had told me to “maybe do a transition run” but I was so focused on the swim and the bike that I hadn’t given it much thought. I hadn’t run further than 10km in months, due to plantar fasciitis, and I had no idea how my foot would hold up. I decided to find a friendly face to run with for the first lap and see how it went. I found a great gal named Kelly from Washington whose goal was simply to finish her first Half Iron. We started running together at about a 6 minute pace, and chatted for most of the lap.

By lap 2, the heat was starting to get to me. I was starting to overheat, and I could feel a lump in my stomach that refused to digest. But by this point I thought, what the heck – I’ve come this far – I’m going to finish the race. I ended up walking most of the second lap. My run fitness just wasn’t where it needed to be to run at my old pace. But I finished.

And that’s the confident message I need to take to Motala with me: I finished. And I can do it again.