Posted by Karmen | With Comments are off for this post. | In Inspirational

“People don’t sponsor you for the day you spend in a beautiful major city, being cheered on and hailed by strangers as a hero. They sponsor you for the dark, lonely mornings when you get up before the heating has come on just to get that extra 5k done…They sponsor you because you are paying tribute to the pain that others suffer by undergoing an experience that will at times hurt you.” – Alexandra Heminsley

All of a sudden I realized that I couldn’t turn my head to the left. It just wouldn’t turn. It was like a muscle stopped working and my neck physically couldn’t do that.

Today was definitely one of the strangest races I’ve even done.
For one thing, the goal was to finish – not to get any particular time. This was, effectively, a training day that just happened to be timed.

For another – I knew that I would have to do it all again tomorrow.

Tri-It Multisport did an amazing job of creating an incredibly safe course – probably the safest swim course I’ve ever raced. There were kayaks and SUPs everywhere on the small loop, and the water was so shallow that I could touch the bottom all the way around. There was about a 50m section of each loop that we actually ran because the water was below our knees!

The downside was the current. Training in Victoria, I don’t get much experience training in choppy water so this was a new experience.

The biggest struggle was dealing with a neck spasm that cropped up in Lap 1. I don’t know if this was a result of the current or a coincidence, but if was certainly nerve-wracking. It forced me to breathe only on my right hand side. The stomach ache and nausea came on in lap 2. This isn’t something I’ve dealt with before, so it took me a bit to figure out that this was simply my body reacting to the current. Weird. Motion sickness 101.

As I was swimming along, I remembered a quote that I read yesterday in Running Like a Girl by Alexandra Heminsky: 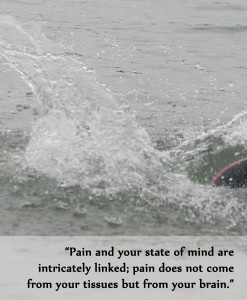 “Pain and your state of mind are intricately linked; pain does not come from your tissues but from your brain…That threat can be compounded by all sorts of other stresses, creating the vicious cycle of leaving the house in terror of feeling pain and thereby creating pain.”

It wasn’t pretty – and it wasn’t fast – but it was an open water swim. Without panic.

Sometimes that’s what it takes.