Posted by Karmen | With Comments are off for this post. | In Inspirational

Swimmers push past me, creating waves with their arms. I can feel the pull of their draft – the water splashing, cold against my face. Arms circling, feet kicking. My hands under the water propel me upwards, but not forward. The neoprene constricts my throat. I can’t breathe. I can feel my heart pounding against my ribs – is this the moment that it chooses to give out?

My vision starts to narrow; the periphery almost non-existent as my eyes zero in on the neon buoy in the middle of the lake – still so far away. I try a few strokes of breast stroke to move forward. My breath comes in shallower and shallower gasps. A kayaker watches me struggle from about five feet away, knowing that he can’t help until I ask or go unconscious. More and more swimmers. Swimmers pushing past, faster, anxious to get around the person bobbing, desperate to stay afloat.

Twenty minutes later, I am back on the shore of Lake Windermere – having been pulled out by a volunteer crew of firefighters. A towel wrapped around my shoulders, and tears – half relief, half anger – stream down my face. This is the third time I have been pulled out of a race due to panic. I vow that it will be the last.

Almost every triathlete that I talk to has, at some point, experienced a panic attack in the water. About 1/3 of the general population will experience one at some point in their life. They are difficult to explain to some that has never had one. But to someone who has, the feeling of impending death, the terror, the pounding heart rate…these sensations are unforgettable.

And yet, in Type A circles where triathletes thrive, panic is rarely talked about. Perhaps joked about, but rarely taken seriously. Anxiety is treated much like mental illness in society as a whole – people are told to “toughen up and get over it.”

The nudge to write this post came after speaking with another athlete who “doesn’t go in the water unless it’s race day.” The thought of open water swimming brings her so much anxiety that she vomits on the way to the lake, lashes out while swimming, and has previously almost drowned another swimmer while reaching for help.

For her, and for everyone out there – whether you are an athlete or not – I want you to know that there is help available, and that it can get better. I write this today in hopes that if you are struggling with anxiety, depression, or any other mental illness, that you will seek help.

If I had diabetes, I could easily explain that I had to take insulin daily, and watch my sugar intake. No one would question this, or judge me as a result. But the shame attached to anxiety disorder is so pervasive that it has taken me three years to sum up the courage to write this post.

Anxiety and depression are two sides of the same coin. Many people have both, and they are treated in similar ways. Both are caused by a combination of unhealthy neurological pathways (“thought patterns”) and an imbalance of neurotransmitters in the brain. Unfortunately, both anxiety and depression tend to place people into a “mental loop,” making it almost impossible to change the negative patterns without help.

For example, when I have a panic attack, whether in the water or not, I believe that I am going to stop breathing and help will not arrive on time. This pattern was traced into my brain over many years, and was my brain’s “go to” response when I became anxious.

In the past three years, I have been pulled out of the water by rescue crews three times during races. I have gotten through two other races only by finding another swimmer who was willing to “buddy” with me for the entire swim leg of the race.

While I have struggled with anxiety for most of my adult life, it was racing in open water that made finally facing it unavoidable. 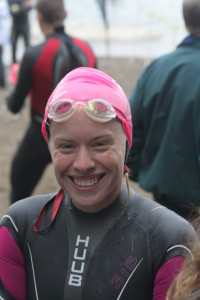 After the embarrassment of the Invermere triathlon, two different friends sat down with me – on two separate occasions. They told me about a technique that had helped them to overcome anxiety. It’s called “cognitive behavioural therapy,” and it is used by psychologists to re-trace neuropathways, allowing positive thoughts to overtake negative ones – decreasing anxiety.

But after Invermere, I realized that I wasn’t getting any tougher.

So, I bit the bullet and emailed a psychologist that my friend recommended. I will call the psychologist “Marie.”

That first visit was one of the toughest things I have ever done in my life. I had to admit that I had a problem – and that this was something that I could not overcome on my own. I had to be honest and vulnerable about my failings, about my insecurities, and about events that had led to the belief that I could not succeed.

At that point, I felt like this was my last hope. So I committed myself to doing everything that Marie prescribed. This included brainstorming, cognitive exercises, and yes, open water swimming.

In total, I met with Marie ten times over a period of six weeks.

I then went and raced the ITU World Championships.

Anxiety is still something that I struggle with. I had a panic attack in the water last Friday morning. But now I have the tools to control my panic, so that it doesn’t control me. I can rescue myself.

Most importantly, I have learned to trust myself. I know that if something goes wrong, I have the tools to help myself, and to seek help if required.

It’s freeing to know that I no longer make decisions about how I spend my time based on what is scary.

I know that in making this public, there are those who will judge my choices, and my panic. Those who will say that “it’s all in my head.” And that’s their choice. I know that I am grateful that I got help. I feel stronger than I ever have.

If you suffer from anxiety, depression, or any other mental illness – please – talk to a doctor or a psychologist. There is help. You can get better.

I also want to say thank you to everyone who have supported me in my journey – whether you were aware of this part of the story or not. You are part of why it got better. Thank you!